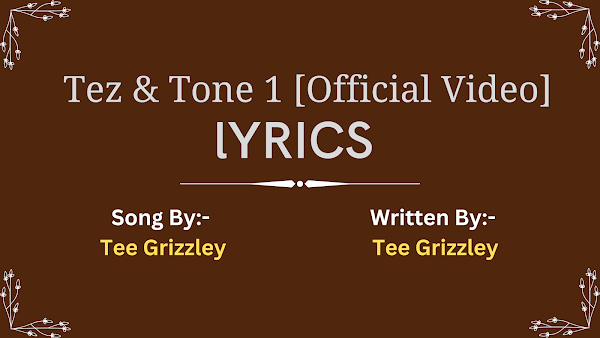 [Verse]
Strollin’ through the hood
Ain’t got no money or dope (He broke)
Already hittin’ licks
He tryna find him a runnier nose (He need it)
His girl been actin’ funny, but he got some funnier hoes
He been livin’ on the streets
Shit ain’t sellin’ at home (He thuggin’)
They can call him Lil’ Tez (Tez)
Two months outta the Feds
He ridin’ around with Glocks and dreads
Shootin’, he gon’ hit a head
But there ain’t no cheese around
His peeps around, but they in the red
Tone got Heroine bricks and P’s around and play with the meds (Let’s get it)
Family reunion Tonе surrounded by rich, serious niggas (They up)
But his nеphew Tez around surrounded by broke, serious killers (They up)
Tez pull up like “Damn Unc let me holla at you for a second” (Hey Unc)
Tone ignore him, pull out a iPhone and look at a message (Damn)
Tez like “Look my nigga I ain’t got no money or dope (Fucked up), I know I can’t rob you, but shit your man’s got a runny nose” (He soft)
Tone man’s like “Nigga I’on never slip”, clutchin’ a blick (Try)
Tone don’t know Tez or really met ery’ nigga he wit’ (Bop)
Murder vibes in the air (In the air)
Tone man’s probably got one Glock, but Lil’ Tez got a pair (Two of ’em)
Tone man’s on the elevator, Lil’ Tez on the stairs (He on ’em)
Tone man’s goin’ home, Tez gonna follow him all the way there (He on ’em)
Aye, follow him all the way there (He on ’em)
Now Tez a couple cars behind, space between the whips (He trailin’)
Text his bros “Fall back, this gon’ be a personal lick” (Got this)
Hit a corner Tez get a lil’ closer, he tryna hit (He want it)
Parked in front of the crib, Tone man’s jumped out with a switch (Bllrr)
Blowin’ through his hood, Tez couldn’t even open his door (Damn)
First one left his neck broke, last one hit his toes
Tone man’s run up on the whip (Bitch)
He tryna leave ’em froze
Tone comin’ through the yard shootin’ (Bop bop)
Hit his man’s in the dome (Bop bop bop bop)
See his nephew Tez slumped in the seat, middle of the road (Neph)
Barely livin’, breathin’, sufferin’ thirteen bullet holes (Stay with me)
He talk a lil’ shit to ’em (You gon’ make it)
But he flyin’ down to the ‘spital
Like “I’m prayin’ you live, but if end up dyin’ nigga I’ma miss you” (My nephew)
Before you jump in that water better know what’chu divin’ for (Ready for this shit)
Tryna be somethin’ you ain’t, niggas gonna send you that ride along (Ready for this shit)
Before you jump in that water better know what’chu divin’ for (Is you ready for this)
Tryna be somethin’ you ain’t, niggas gonna send you that ride along (Is you ready for this)
Lil’ Tez in a wheelchair, but he gon’ live (But he gon’ make it)
Right side of his body ain’t got no ribs (Damn)
Niggas call Tone phone like “Nigga you on our own (Your own), tryna save that lil’ dirty ass nigga you done took one of your own”
Damn, Tone ain’t got a regret (At all)
Either his main man or his fam, somebody had to get left (That’s blood)
His plug ain’t sellin’ him another gram, ran right out of respect (Straight up)
At least he keep a couple hunnid bands, Tone still got ’em a check (Tone still got ’em a check)
And he know niggas wanna get back, he say he gon’ move away (He outta here)
And he ain’t no dummy, he can’t let it happen so he gotta move today (No plan)
Jumped in the Trackhawk, goin’ full speed headed towards his home
Pull up can’t believe his eyes, all his doors was gone (The fuck?)
Crib was empty, niggas took everything includin’ the money (Down)
Ain’t got shit now it’s goin’ downhill, Tone feel like a dummy (The fuck I do?)
Back to Tez talkin’ to the nurse, he been tryna drill the bitch (Fuck with me)
He told him to “Chill, I’ma fuck wit’chu once you heal from this” (You playin’)
Check out time, doctors got ’em on a bunch of pills and shit (Percs)
Nurse like “Let me know if you can sell ’em, I got some deals and shit” (On that)
Tez knowin’ he can flip ’em in the O, that nigga gon’ sell the lick (Hell yeah)
She front him a thousand, shit get around he gon’ make a killin’ with this (Gon’ turn up)
Tez first turn around went good, he brought back sixty K (Ran it up)
Gave her dub, told her “Bust twenty more ‘scripts today” (I need ’em)
Kept sendin’ pills down to the O, custos kept on spendin’ (Yeah)
Next thing you know Tez and the nurse bitch ridin’ around in Benzs (They turnt)
Big boy Rolex on his arm, cuban link on his neck (Ice)
Start makin’ all the opp niggas faint, Tez done ran up a check (He rich)
And he don’t want Tone feelin’ left out (Hey Unc), so he bought ’em a ‘Vet (Here you go)
And put ’em on route down to the O (Let’s get it), shit ‘chu the rest (Let’s get it)
Nigga, you know the rest (Let’s get it)
[Outro]
You know the rest (Let’s get this fuckin’ money man)
You know the rest
You know how it go (Yeah)
You know the rest

Note :- If You notice any Mistake In Lyrics Please Do Contact with Us On “admin@lyricsong.xyz“.